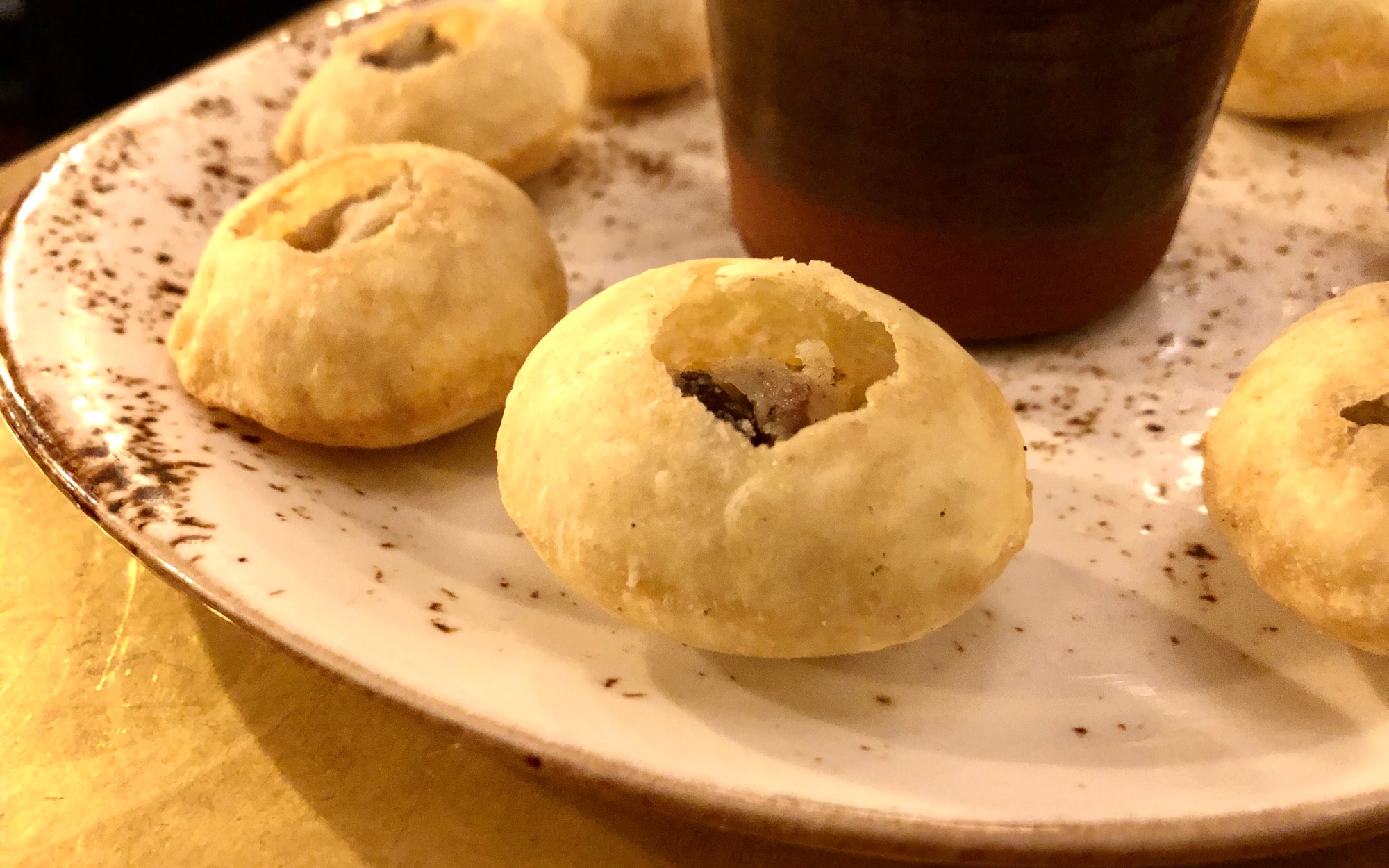 Even though the open courtyard of Kingly Court is partially covered during the winter, the air is still crisp and cool with patrons congregating around patio heaters placed sporadically throughout the ground floor. Kingly Court, located in SoHo in West End, hosts a number of pop up cafes and resident restaurants on all three levels. The ground level has patio seating for first level restaurants. It’s busy with people entering and exiting while those who are meeting their party excitedly wave from across the courtyard with elevated voices, hoping to grab their friends’ attention before a wrong turn is made.

As I ascended the stairs to the third level, the busyness and loudness faded. I had late evening reservations for Darjeeling Express, Asma Khan’s newly minted Michelin star restaurant as featured on the sixth season of Chef’s Table, the docuseries created by David Gelb. Khan is the first chef from the United Kingdom to be featured on Chef’s Table. I wondered if an earlier reservation was available.

AT THE TABLE features culturally significant cuisine that I have experienced and/or researched during my travels. From Dan Barber’s Blue Hill at Stone Barns to Christina Tosi’s Milk Bar, and local New York eats such as Jack’s Wife Freda that just remind me of home, I have been fortunate to have had opportunities to visually capture and taste the menu these restaurants offer (Blue Hill does not allow guests to photograph their food as it ruins fine dining aesthetics). The possibility to dine at Darjeeling Express in London held a higher level of excitement.

It’s due to the narrative of Asma Khan and her disruption to traditional kitchens, Indian food, and activism in immigration; specifically, those of migrant women workers. Her rich and complex personal history is the foundation to her vibrant spirit, restaurant, and cuisine. Her kitchen is all woman staffed, with no culinary training. All of them know how to cook but never cooked in a professional kitchen but in time, learned and managed the kitchen together throughout many failures and finally, successes, with Darjeeling Express opening in 2017. Soon after, the restaurant was featured on Chef’s Table sixth season, and earned a Michelin star – all in 2019.

The meal bursts with flavors and hold a spectrum of textures. Puchkas are thin and crunchy, similar to potato chips (crisps in the UK), filled with potatoes then filled with tamarind water. When the Puris arrive, they are warm and puffed fresh from the fryer, then slowly deflate into a soft sponge that absorbs the tamarind, coconut, almond and peanut base that compliments the braised eggplant served best over Basmati rice.

When I first arrived and was seated in Darjeeling Express, I stared at the soft blue wall across from my table. Black and white photographs in not so fancy picture frames hung unevenly and a bit disheveled. It was time to read the menu when I noticed a small note. In addition to her charity to celebrate daughters (specifically, second born daughters in India), I read her statement on a new charity she supports for women and girl ISIS survivors. Darjeeling Express focuses on raising awareness to lift those in vulnerable circumstances and communities. Khan stopped by my table and soon became my dinner date, albeit brief. We discussed racial and gender inequality, the emotional difficulty of loneliness, and how the meal I chose (that she prepared) was especially correct. It is an evening to remember.

For more thoughts on London Cuisine, please head over to –> London Cuisine: To Eat, Or Not To Eat?
Want to know more about London? Here is a travel essay –> London